Our gang of dogs 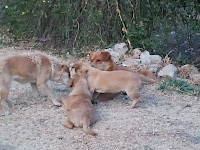 I used to have 4 dogs (and ten puppies), all stray dogs, and now 3 of them (and 1 puppy) happily lick me whenever they get the chance to. "But what about the fourth one?" is the expected question. Well, the cutest of my dogs passed away. R.I.P. And that doesn’t mean ripped in pieces. Just.. died. Because of some kind of virus or bacteria, I guess. But another reason that could perhaps be the cause is that someone deliberately poisoned the food. That dog’s name was Puppy, and he was the biggest of my dogs. An auburn coloured one is called Sushi, a frizzly cute golden young adult called Toto (but she’s actually a girl, as we figured out!), and a golden calm mother called Pinky. I’ve already told you that we also had 10 puppies to care for. Pinky and Toto were to blame. Pinky had a litter of six and Toto gave birth to four. Five were happily given away, one disappeared, two were unpurposely taken, and finally we were only left with one puppy, by the name of White Paws. Now we have a total of 4 dogs.
I forgot to tell you that Pinky is a very extraordinary dog. 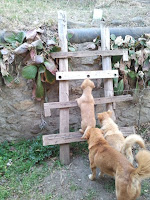 Email ThisBlogThis!Share to TwitterShare to FacebookShare to Pinterest
Labels: Surroundings