A simple game, which originally consisted of five stones, and now one small ball and four stones, is one of the most beloved games in schools.
In other countries, the original name is Five Stones, with the ball namely Jacks.
This season is it. The game's hot and everyone is buying the famous ball. The commonest conversation in order to join or play an Ek Dupa* game is usually: "Wai, can I play?" If approved, will continue, "Everything is there, okay? But no touch and shift. And no zig-zag."  (By the way, if not approved, the meanie will say after some persuasion with a tone of determination and irritation: "Please, wai!!"
If there is an even number of players, somebody usually suggests partners, followed by an: "Okay, partner first!" 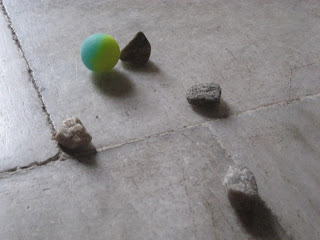 The game starts out with Major; each player takes the four stones into their palm and throws them in the air, trying to catch the most stones on the back of his hand. After some fall on the back of the hand, the player throws them once again to catch them in the palm. The final number of stones in the palm counts. If there is a team of players, they all follow the process and the number is summed up. The player or team with the highest number start the game.
Next, the player throws all the stones on the surface and throws the ball up, letting it bounce once while taking one stone from the floor. He repeats until all the stones are in his hand. He throws all of them a second time, this time taking two every time. The process is repeated for a third time, taking three in the first round and one in the other. This is the basic starting of Ek Dupa. Sometimes rules are made that when you are taking a certain number of stones you are not allowed to touch the other stones.

Next comes Cobra - in this stage you don't need a ball. You throw all the stones in the air and catch some on the back of your hand. You throw them from the back again, and while suspended in mid-air, catch them from up with a jerky movement (with an upward movement). Like a cobra charging.

Next come the am or ams. The player throws all the stones on the surface again. The fingers are bent in a particular shape. The player throws the ball up, and passes one of the stones through the fingers. He repeats that until all the stones are through, then picks them up with another throw of the ball. Once again, the player does this, though this time the fingers in a different shape. The shape of the fingers is hard to explain - there are so many possibilities. One of them is to bend your thumb and pointer finger into a semi-circle and then set that on the table, passing the stones through the circular "gate". Another is to use your pointer finger and the middle finger and stretch them, until they become a triangular roof. Then you pass the stones through.

The next step is calendar. Your opponent holds an open hand up, the little finger touching the surface. You take the stones into your hand and drop them over the opponent's hand. Your opponent has to choose two stones and take them away, so that only two stones are left on the surface. Then you have to flick your hand at one of the left-over stones and try to hit the other stone. If you don't hit it, you're out. So, a tip to your opponent: try to take away two that leave really far away stones, so that you have more chance that your opponent will be out.

If you are out (if the ball does a double bounce, or if you don't take enough stones e.g. you have to take two but by mistake you take one, if you don't catch all the stones which have fallen on the back of your hand in the Cobra stage) the turn will pass to your opponent.
After you finish the ams, there will be a stage called Game; a number of stones is decided (it can't be above four). You can also choose more than one number, for example 3 and 4. The player has to get an equal or higher number, and then can pass on to the next "level", called Game x (1,2,3,4,5,6 etc.). All the games are the same; including the same stages and same rules, though someone can call out a change (e.g. from Game 5 there is no touch). You can decide on a final Game like when someone reaches Game 10 he wins and the game is over.
Though I've never finished a game... Can you??
Good Luck... Tashi Delek!

*Ek means one in Nepali and Hindi, and the stage in which you take one at a time (the first step after major) is usually called ek dupa. You'll take four rounds to take all the four stones one by one, right? After taking each stone, pronounce each vowel: Ek-Du-Pa-Ek/Panch
Later exchange the first Ek for Dui and Teen.
Posted by Michal at Thursday, August 30, 2012 No comments: