Do you know what Druk means? It means Dragon, or in this case Bhutan. Can you guess what’s my school’s name? Yes?!! It’s Druk School, and has been graded the best school in Bhutan for quite a few years now.

On May 15 2012, His Majesty Druk Gyalpo Jigme Khesar Namgyal Wangchuck visited our school.
Our school has recently been upgraded to standard 9. It is a middle secondary school.
Druk School is near the Buddha point in Thimphu.

We have five fun activities throughout the week - Arts, H/PE, Library, IT, and Music. There are also a lot of school events like the annual concert and sports day.
The uniform is a checked peach-colored material and the tego is flaming red. The wanjo is lightly skin colored. On days when we have HPE and on Tuesdays (Pedestrian days) we can wear our school tracksuit - a sleek silver-blue with two white stripes on the sides. The jacket informs: Druk School, Thimphu
Druk School has 65 teachers and almost 700 students!
I enjoy being at school. I think the majority of kids are!

Email ThisBlogThis!Share to TwitterShare to FacebookShare to Pinterest
Labels: Surroundings

Travelling to the Moon - An Essay for School

Travelling to the moon was once considered science fiction, but now people can be sent to the moon by spaceships. Spacesuits help a lot in outer space, too:

The moon has 6 times less gravity than earth, so objects and people can float on the moon. The moon doesn't have oxygen either, so astronauts have to take air balloons with them.
In the spaceship, things are kept in safe places as to keep them in place. A 100 kg weight on earth would weigh less than 17 kg on the moon!

One of the first living things sent to the moon, Laika, was a dog sent to outer space by Russia, died after 4 hours in the spacecraft. Laika was a street dog before her sending to outer space. She was trained to sit in a spacecraft and to be used to loud noises that the spaceship's engine made. The Russians, at that time competing with America, wanted to experiment sending an animal to an orbit with earth. First the Russians claimed that Laika had lived for 3 days inside the spaceship, but 45 years later they admitted that she had survived for only 4 hours. This raised a protest on animal cruelty among the Russians.

The moon has no water of its own, so astronauts have to take their own water.


The Apollo Missions were many spacecrafts sent into outer space. In 1969, an American named Neil Armstrong, mission commander of the Apollo 11 (the third lunar landing of the Apollo Missions), took the first step on the moon. His famous words on the moon are: "That's one small step for a man, one giant leap for mankind." These words became famous throughout the whole world.

Travelling to the moon has advanced the modern science very much. Astronauts sometimes take notes when on the moon and bring them back to earth. The astronauts have to take pencils as the ink inside pens would not go down onto paper and instead go up because of the less gravity.

The view on the way to the moon is absolutely wonderful. Stars, planets, and other galaxies lay on the blackness of space. Some spaceships, in order to capture this fabulous sight, have high-tech cameras planted on them.

The moon has some steep cliffs and big craters so it can be dangerous. It's also made of rocks, just like earth.

Astronauts must train for years before they can go out into outer space or even to the moon. They need to learn how to fix the spaceship if it breaks down in space. They also must learn how to use their spacesuits.
Astronauts must have excellent eyesight. Many people train for years to become astronauts but cannot travel into space or to the moon because of their eyesight or other defects.

Astronauts are not very safe on the moon, but high-tech sensors and radios installed on the helmet or spacesuit help the operators on Earth to know whether the air pressure and temperature are comfortable for the astronaut. The operators can also sometimes change the temperature and air pressure inside the spacesuit!

Travelling to the moon has developed modern science a lot, and as Neil Armstrong said, is a giant leap for mankind.

Email ThisBlogThis!Share to TwitterShare to FacebookShare to Pinterest
Labels: Projects

Journey from Thimphu to Bumthang

This is the first post about a journey. Our journey was from Thimphu to Bumthang, stopping for a night in Trongsa. 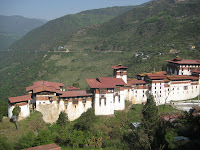 The eight-hour travel by car to Trongsa on the first day was very exhausting, but very very rewarding. Trees surrounded us from every direction, and from time to time we would catch a glimpse of a chattering monkey. We passed Wangdue, where the view changed from dense, thick layer of willows to a light encircling of pines. We stopped on the way for lunch. Our restaurant was a small, home-owned place, where we were served red rice, dahl, and ema datshi (chilies boiled together with local cheese - beware!).
We stayed in a nice hotel called Tashi Ninjay, having a good restaurant and a marvelous view over the huge dzong (ideal place for photos). 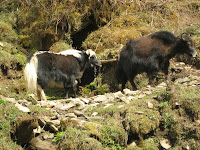 The next day, we were in the car about two or three hours to Jakar, Bumthang. We stopped in a pass called Yotongla and ever so grateful to stretch out our aching limbs. When we passed the border to Bumthang, the landscape changed again. Now there were more houses and especially stone buildings. Still, it was much more "treey" than Thimphu... obviously.
I was looking forward to the longest straight stretch, which lasted (on car) less than 3 seconds.
We finally arrived at Kaila Guest House, our habitat for the next three nights.
The next day, we drove over to UWICE (Ugyen Wangchuck Institute for Conservation of Environment), and my parents helped the institute install a moodle. This also happened for 2 more days,  in which I got the chance to update this blog and my other website, Bhutan Baby Book Reviews. 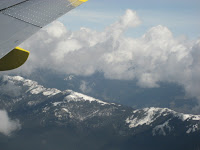 We took the flight back! It was absolutely wonderful. Snowy mountains, green valleys and misty clouds drifted about. The plane was really small, only fit for 8 people, and all these seats were packed.
We landed at Paro, and took a car back to Thimphu - home sweet home.

Email ThisBlogThis!Share to TwitterShare to FacebookShare to Pinterest
Labels: Journey

Archery is the national sport of Bhutan, and by far the oldest. Traditional bows can be as tall as an average man, but the recent modern ones are less than half that size. Archery is always professionally played by men. The Bhutanese tradition of archery consists of two teams, taking turns to shoot at the target. The target is usually very far away and I’ve seen one that was 5 km from the archers. The archery performed is very, very dangerous. The team which is at that time not playing (it is not their turn) dance cheerfully in front of or very near the target (!) while the other team is shooting! A father of one of my classmates is an archer, and he often goes to other dzongkhags for the matches. 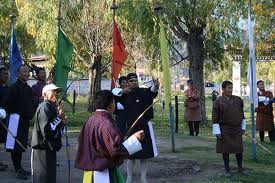 Kuru is a heavy dart, adorned by a great variety of colourful feathers, and again, the game consists of two teams, taking turns to shoot at the target. One difference is that Kuru is commonly played by women in official matches, while men often play it on holidays as a hobby.
Posted by Michal at Thursday, May 03, 2012 No comments: