First of all, what is datsi? It's the Bhutanese cheese, a soft, melted cheese which the locals use to make local delicacies (and bound to disagree with your digestion, too). Ema means chilli. Kewa is potato, and shamu is mushroom. Did you, then, guess what these foods mean? Ema Datsi is the national dish, a plate of chillies served mixed with datsi. Not only is it the national dish, it is also one of the spiciest dishes. I've tried it only twice or thrice, and got out with a fiery tongue. I'm not saying it's bad! But is it ever spicy! Kewa datsi is pretty much the same thing, but, as you might guess, instead of chillies, it is served with potatoes. The datsi in this dish is quite hot, because otherwise the taste would have been bland. The shamu datsi is my favourite, because it's full of mushrooms, and  I personally adore mushrooms, especially the sangay-shamu and button mushrooms sometimes found in the local market in Thimphu. These are big, tough mushrooms, which, in good cooking, can be simply heavenly. Anyway, back to the subject. The datsi in the shamu datsi is also quite spicy, but not as much as the ema datsi, of course.
All the Bhutanese love these dishes, and mostly eat them every day... with... rice, rice, and more rice!
Posted by Michal at Thursday, July 05, 2012 No comments: 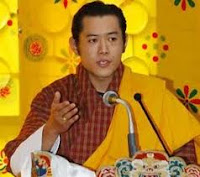 The current king, His Majesty the king Jigme Khesar Namgyal Wangchuck, is the fifth Druk Gyalpo (ruler of Bhutan). Lately, as response of shocking disciplanary problems in Kelki High School, the king began to visit the sschools especially in Thimphu. He visited Changangkha middle secondary school, Kelki High School, Pelkhil, Jigme Namgyal School, and finally Druk School (of course). He left a great impression trailing after him after each visit.
The king is the only person in the whole Bhutan "allowed" to wear a yellow kabney (except for the religious leader the Je Khenpo). This separates him clearly from the rest of the crowd. Fortunately, our king, and all his royal Wangchuck ancestors, ruled and rule Bhutan kindly and justly. 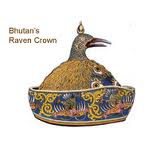 The crown of the past and living kings of Bhutan is magnificent. It carries the national bird on top: the raven and is decorated at the bottom with skulls and on the top with many wonderful Bhutanese patterns. It was passed on to all of the Druk Gyalpos through many decades.K4 is still living. He passed the crown to the Fifth Druk Gyalpo at an early age. The Coronation was done at 2008, all the people of Thimphu, Bhutan viewing it in between the bustle in the streets.
The king also recently married a charming young lady, now named Ashi Jitshen Pema. It was the talk of everywhere, and still banks, museums, cafes and other sorts of buildings hang their famous photo.
Posted by Michal at Monday, July 02, 2012 No comments: 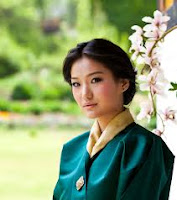 Ashi Jetshun Pema, a recently queened queen, was and still is the main talk of the year. Her Majesty and the His Majesty were married in 2011, and the message sent the Bhutanese floating with joy. Buildings hung marvellous neon lights, and most importantly the photo of the two royal lovers together.
The queen is a lovely woman, constant lover of children, and altogether a wonderful queen. By the way, she's really beautiful too!
"The Royal Wedding" has become a household word already.
And of course, you mustn't forget, a mother means a child (usually), and the Bhutanese citizens are waiting expectantly for the birth of the auspicious sixth majesty, who can continue the wonderful monarchy of the Wangchuck royalty.
Posted by Michal at Monday, July 02, 2012 No comments: