This may be surprising; there are no supermarkets - the way you know them in the west - in Bhutan. In the developed world, fresh pasteurized milk and eggs and drinkable water from the tap are taken for granted. But here, in this small developing country, the milk has to be boiled to make it safe, and soft-boiled eggs can be deadly. Also, to purify the water, you need to boil it, then wait for it to cool, and finally transfer the water to a water filter. 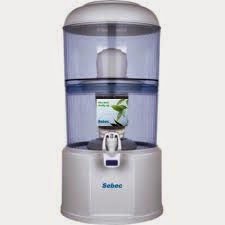 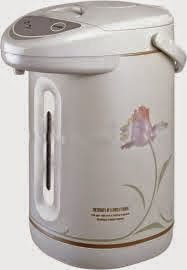 So basically, we don't have a lot of processed food. My dad makes home-made yogurt (the packaged one produced locally is not to our taste) and my mother makes bread - and pizza - at home. In the past few years, more and more bakeries have opened in Thimphu and the bread and pastry situation has improved. There are not many bakeries, because the usual carbohydrate in the meal is rice, so bread is not commonly used.

So, now it's our midterms, and I have to study hard! The exams at Druk School go in four sets: the first term, mid-term, second term and annual. The first and second term exams are weekly exams that don't have a vacation after them and the exam day continues as a normal school day. The midterm and annual examinations are usually daily but may have a holiday in between two exams, and after the exam there are no studies but we go home straight away. There is a vacation after the midterm and another one after the annual string of exams.
Now, mid-term is usually referred to in the middle of a term or semester, but in this case, it means mid-year. The annual exams are the final exams.
Our midterm exams began Saturday, June 8th. I'm in 6th grade, and our first exam was English. Second, Dzongkha. I find Dzongkha very difficult but I had pored over my books and the exam was easier than the first term paper. Our third exam was Social Studies. Then, Science. Finally, Maths.

Then....? V-a-c-a-t-i-o-n VACATION!!! We get a  break of about a month which I will spend in Israel, enjoying life on the beach (there aren't seas or oceans in Bhutan).
Check the blog out soon for an exciting post differentiating between Bhutan and Israel!
Posted by Michal at Thursday, June 13, 2013 No comments:

Trip to the Bajothang Book Fair

Recently, the yearly Book Fair was held in Bajothang, Wangdue. The Rigsum Institute of IT and Management (the institute in which my parents work) had developed a suite or collection of educational programs like Wikipedia, Khan Academy, Scratch and a lot more. The great thing about the Sherig Collection is that it requires no Internet! The idea was that schools with IT labs or computers that have slow or no Internet connection can use programs that are usually not offline like Khan Academy, instead of only focussing on Microsoft Office (Word, Powerpoint etc.). The video below explains the idea of the Sherig Collection. If you're observant (and if you read my other posts), you'll note that the music at the beginning and end of the video sounds familiar... If you're interested, you can also visit the Sherig Collection website.

Tharingsa is a, no, the hit in Bhutan. Newborns to Angeys (grandmas) sing it with happiness, whether at a basketball court or just near the Double Turning. The familiar "Gatay taa rung" is now a national phrase. It is my favourite song, personally. I find it irresistible, so, if I hear someone singing it, I have to, too!

Email ThisBlogThis!Share to TwitterShare to FacebookShare to Pinterest
Labels: Music

Not long ago, the United Nations declared March 20th as International Happiness Day or International Day of Happiness. Bhutan proposed this day to the UN in lieu of  'the need for a more inclusive, equitable and balanced approach to the economic growth that promoted sustainable development and poverty eradication, and the happiness and wellbeing of all people.'

Now it is declared a government holiday in Bhutan for people to enjoy life.
Posted by Michal at Sunday, March 17, 2013 No comments:

Email ThisBlogThis!Share to TwitterShare to FacebookShare to Pinterest
Labels: Holidays 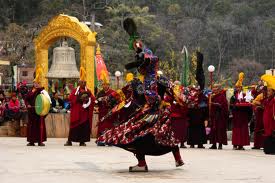 The first day of Losar is celebrated by drinking a customary alcoholic "beer", changkol. 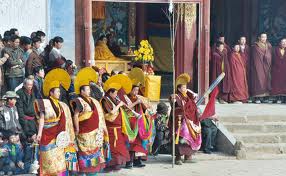 Posted by Michal at Saturday, February 16, 2013 No comments: 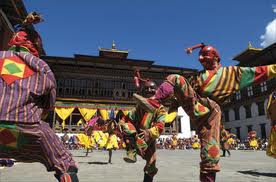 The Tshechu is a sort of festival where many beautiful dances go on and people receive blessings. There are mask dances including world record-jumps and twirls. Usually the last days of the Tshechu are the most popular; the blessings go on during that period.
There are also clowns (also masked). You can see the mask of one in the left picture (the one with the red mask with its face to you).
Occasionally, traditional Bhutanese plays are acted out, though this is uncommon, and the Tshechu consists mostly of dances.
If you plan to go to a Tshechu, wear a good hat, bring water, and be generous with sun-lotion since the Tshechu is usually conducted in the afternoon, in summer, when the sun blazes on your unfortunate shoulders.

Email ThisBlogThis!Share to TwitterShare to FacebookShare to Pinterest
Labels: Tradition 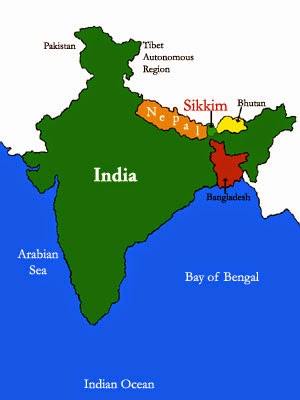 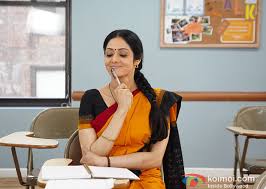 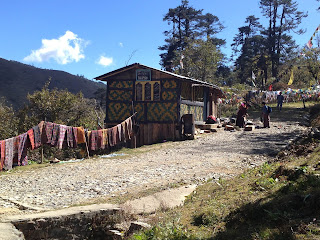 *The long vacation is in winter because the winter is ferociously cold there, and the schools want children, not frozen popsicles. The vacation is as long as the winter, and the winter is usually December, January, February.
Posted by Michal at Saturday, January 12, 2013 No comments:

Typos in English are quite common in Bhutan, as in some other countries in Asia.

The Lattest Collection, announces a flashing shop. Menus are also a rich source of amusement; "Fried Rise with veg." as a restaurant's specials, or "Meat ducklings", or, if you're interested in cannibalism, "Fried children". So, if you're on a trip to Bhutan, look out for these funnies to engage you.

Another classic that runs around town is the shop proclaiming Go d and Silver Smith, the 'l' of gold detached. A godsmith, by the way, is a maker of idols. After a few years of people laughing at him, the poor shop owner took away the l from silver and attached it to gold and hopefully you will find the amusing sign: Gold and Si ver Smith.
Posted by Michal at Saturday, January 12, 2013 No comments: